Sierra Leone Embassy in the United Arab Emirates, UAE, in collaboration with the International Organization for Migration, IOM, is facilitating the voluntary repatriation of 58 Sierra Leoneans from the UAE to Sierra Leone.

These 58 Sierra Leoneans had expressed desire to be taken back to Sierra Leone, especially because of loss of jobs as a result of the COVID-19 pandemic.

In his reaction, Sierra Leone’s Ambassador to the UAE, Rashid Sesay, said that the 58 Sierra Leoneans had approached the Embassy to ensure their repatriation back home. He said that each of them were interviewed, issued consent forms which they voluntarily signed demonstrating their willingness to return home in line with IOM regulations.

This move is a major milestone demonstrative of the New Direction’s desire to cater for everyone and to uphold the dignity of every Sierra Leonean irrespective of their status. 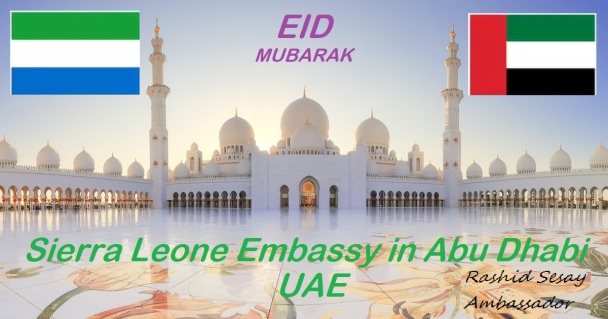 The two leaders, who enjoy a great fraternal relationship, last week held a virtual meeting to discuss the consignment.

Receiving the items on behalf of the President, the Vice President commended the Crown Prince for the gesture, saying that that was demonstrative of the strong bilateral ties between the two countries.

In his reaction, Sierra Leone’s Ambassador to the UAE, Rashid Sesay, who could not witness the handing over ceremony due to COVID-19 traveling protocols said, “We are thankful to His Highness the Crown Prince and the People of UAE for this gesture at such a difficult period. We hope to further foster relations with the UAE for the benefit of our two nations.” 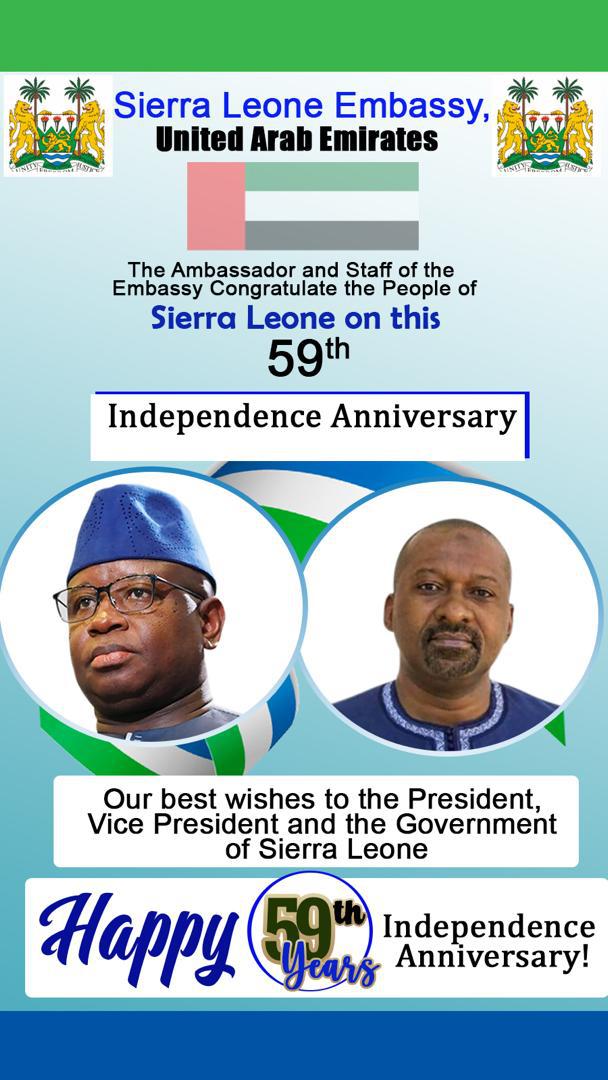 The UAE leaders gathered in Zayed Military City for a presentation cataloguing the country's achievements during its five-year involvement in the Arab Coalition's efforts to restore the legitimate and internationally recognized government in Yemen.

Vice President and Ruler of Dubai, Sheikh Mohammed bin Rashid, described the galant servicemen as faithful falcons, who sacrificed and raised their heads with pride adding that they were proud of them, their family and work.

Crown Prince of Abu Dhabi and Deputy Supreme Commander of the Armed Forces, Sheikh Mohamed bin Zayed, assured that the UAE would remain a bridge to peace and stability, supporting the region's progress of hope for a better life and a better tomorrow.

In his reaction, Ambassador Sesay said: "On behalf of the Government of Sierra Leone, I congratulate the UAE for being a beacon of global peace and security."

Ahead of the first year anniversary of His Excellency President Julius Maada Bio, State House Media and Communications Unit will be showing short videos of Ministers and Heads of Agencies/Parastals to showcase the first year achievements in Government.

ABU DHABI, 23rd February, 2019 (WAM) - The Emirates Red Crescent, ERC, has launched a number of development projects in the Republic of Sierra Leone, under the directives of His Highness Sheikh Mohamed bin Zayed Al Nahyan, Crown Prince of Abu Dhabi and Deputy Supreme Commander of the UAE Armed Forces, and the follow-up of H.H. Sheikh Hamdan bin Zayed Al Nahyan, Ruler's Representative in Al Dhafra Region and the ERC Chairman.

The projects included the provision of water resources in water-scarce areas, where the project provides 60 percent of the needs of these areas with clean water. It also includes the construction of houses for underprivileged families, as well as schools, clinics, mosques, and other service projects aimed at improving the lives of the population.

The inauguration ceremony was attended by the ERC delegation comprising Fahad Abdelrahman bin Sultan, ERC's Deputy Secretary-General for International Aid and Cooperation, and others, Dr. Jonathan Bonopha Tengbe, Minister of Water Resources in Sierra Leone, Rashid Sesay, Ambassador of Sierra Leone to the UAE, along with a number of officials.

Dr. Mohammed Ateeq Al Falahi, Secretary-General of the ERC, said that the directives of Sheikh Mohamed bin Zayed were a part of the initiatives undertaken by the leadership to develop and reconstruct areas that suffer from vital development.

Dr. Al Falahi said that Sheikh Hamdan bin Zayed is constantly monitoring the progress of all the projects implemented by the ERC needed by brotherly and friendly countries.

He added that the authority has completed these projects in record time to achieve the vision of the country's leadership and to meet the needs of Sierra Leone’s citizens to alleviate their suffering.

The beneficiaries expressed their appreciation to the UAE for their ongoing efforts in carrying out several development projects, especially in relation to water projects and other services.

Meanwhile, Vice President of Sierra Leone, Mohamed Juldeh Jalloh, received the ERC delegation in the presence of Jonathan Tengbe, where they discussed the impact of humanitarian projects undertaken by the ERC on the local community and the other projects they will implement in the future.

The Sierra Leone Vice President thanked the ERC for its sincere efforts to meet the humanitarian and development needs of the people. He affirmed his country's readiness to remove obstacles facing the ERC’s humanitarian work.

Tengbe expressed his thanks to the ERC for its significant humanitarian efforts and also commended the UAE.

AMEA Power is an energy producing company that develops, owns, and operates thermal and renewable power projects in Africa, the Middle East and Asia. The company offers a wide range of power solutions that meet the needs of the emerging markets they cater to, including conventional (Gas, Coal and Oil) and Renewable (Solar PV and CSP, Wind, Hydro and Hybrid) power plants.

Sierra Leone Ambassador to the UAE, Rashid Sesay, recalled that during his courtesy call on the Dean of the Diplomatic Corp in the UAE, he spoke about the challenges of the energy sector in Sierra Leone, adding that that meeting led to his meeting with Chairman AINowais, who according to him, was one of the biggest players in the renewable energy sector in the UAE.

In his presentation, Chairman AINowais said they were very interested in investing in Sierra Leone’s energy sector. He said energy was the driving growth of any economy, adding that without energy it was difficult to grow an economy. He noted that they were now looking at investing in different African countries, having already undertaken a lot of investments in the Middle East.

“We are looking at Sierra Leone as a place for investment and I am here to explore the investment opportunities in the energy sector. We realized Sierra Leone has the potential and the need for growing its economy by investing in energy. The project will benefit Sierra Leone by generating power and expanding its base, helping to grow the economy and will also provide comfort to Sierra Leoneans,” he said.

Minister of Energy, Alhaji Kanja Sesay, said that during his visit to the UAE, he had the opportunity of meeting the Chairman who was keen on energy provision around the world. He disclosed that they both spoke about the general energy situation in Sierra Leone with particular reference to the Western Area Generation Project, which the new government inherited, but was facing challenges after the World Bank, being one of the key players, withdrew from the project.

“During our discussions Chairman AINowais got to know about the project and has expressed interest in looking at it again, so we agreed that he should visit Sierra Leone and that is why he is here with his team with whom we have done preliminary discussions at the Ministry. His team is now working with my technical team to see how we are going to progress from here,” he said.

In his response, President Bio said that energy was an important backbone for any economy and that the country could not embark on development, which was in dire need, without reliable power supply, adding that his government would welcome any project, be it government or private partnership, that would work towards creating a very reliable power supply in the country.

“From what I have heard, you have shown interest and we are also interested. So, whatever we can do to support the ambition and mutual interest, we can work together and make sure we provide energy to our people. We are also ready to do anything to create a situation where the tariff can go down for our people so it is cheaper, cleaner and sustainable,” he said. 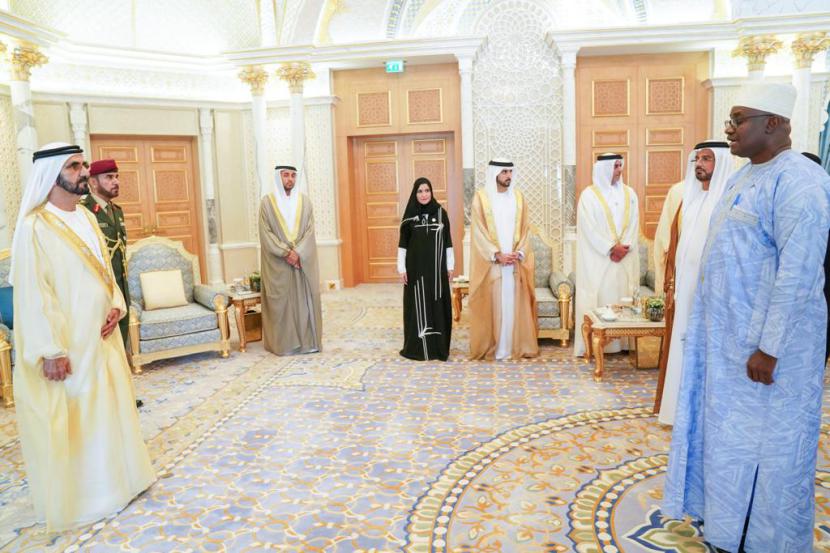 The new Sierra Leonean Ambassador to the United Arab Emirates (UAE), His Excellency Rashid Sesay has on Monday, November 19th, presented his letters of credence to His Highness the Vice President and Prime Minister and Ruler of Dubai, Sheikh Mohammed bin Rashid Al Maktoum, during a brief ceremony held at the Presidential Palace in Abu Dhabi.

During his presentation, Ambassador Sesay said that Sierra Leone and the United Arab Emirates have enjoyed a fruitful relationship over the years, adding his assignment in the UAE was in line with President Bio’s committment to further strengthen the bilateral ties between the two countries. He noted, a lot of Sierra Leoneans visit the UAE in pursuit of business opportunities and expressed optimism for future exchange visits between the two countries to further deepen the ties.

Ambassador Sesay also disclosed that since his election as President of Sierra Leone, President Julius Maada Bio was facing a lot of challenges especially because of the poor state of economy he inherited, adding the President was working tirelessly to fulfilling his campaign promises. He informed the UAE authorities about the pending visit of Sierra Leone’s Foreign Affairs Minister Dr. Alie Kabba to the country in a bid to finalize and possibly sign a Memorandum of Understanding on Visa Waiver.

Also in attendance at the ceremony included Sierra Leonean staff in the UAE Embassy and the German Ambassador to the UAE who expressed optimism for more benefits to be derived from cooperation through the diversification of global economy. 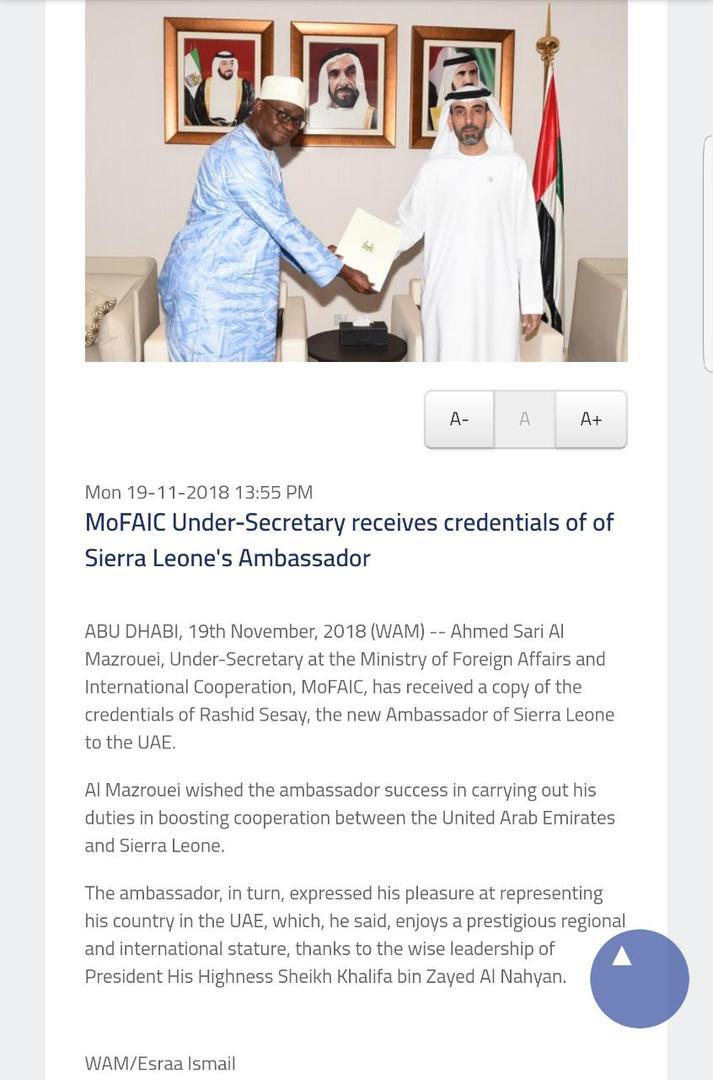 Sierra Leone’s Minister of Foreign Affairs and International Cooperation, Dr Alie Kabba has during a working visit to the United Arab Emirates (UAE) signed a visa waiver agreement that would give free entry into the UAE to Sierra Leonean holders of service and diplomatic passports.

The signing ceremony, which took place at the Ministry of Foreign Affairs and International Cooperation in Abu Dhabi, came after lots of engagements between the Government of Sierra Leone and its UAE counterpart.

Sierra Leone Ambassador to the UAE, Rashid Sesay who also witnessed the signing ceremony, said the agreement was in line with efforts by the two countries to further strengthen their diplomatic ties.

He added: “We are very happy  for this move as it signifies the tremendous progress we have made in deepening our relationship with the UAE,” he ended.