Al Maktoum Foundation is a UAE-based charity organization that provides support for countries in need, particularly in areas of education and healthcare. It has also embarked on the construction and equipping of hospitals and healthcare units as well as financing the construction of care homes to assist persons of special needs.

Board Member of the Foundation, Mirza Al Sayegh, said that they were moving their focus to Africa and were especially pleased with the development priorities in Sierra Leone. He commended the government’s free quality education program, saying that was in line with their vision.

He also mentioned their Foundation was ready to construct a school, hospital, mosque in Sierra Leone with accommodation for employees and assured of their readiness to partner with government in other areas of development.

First Lady Her Excellency Madam Fatima Maada Bio, who was also part of the meeting, discussed the various strides made by Sierra Leone in the area of women’s rights and empowerment. She also noted that Sierra Leone was a country of religious tolerance and respect for diversity.

During the meeting, President Julius Maada Bio commended the charity group for their incredible work especially in the areas of education and health. President Bio welcomed the interest by the charity to help his country’s development and assured of his government’s commitment to collaborate in areas of shared interest. He also thanked Sierra Leone's Ambassador to the UAE, Rashid Sesay and his team for their work in promoting his vision in the UAE.

President Julius Maada Bio has completed his visit to the UAE and has today departed for Sierra Leone. The President and his delegation held series of successful meetings with both the public and private sectors.

Dubai, United Arab Emirates, Friday 15 October 2021 - His Excellency President Dr Julius Maada Bio has addressed the EXPO 2020 Dubai’s Investment Forum and assured a huge audience of investors on some of the opportunities Sierra Leone can offer and policies in place to guarantee a return on investments.

Welcoming dignitaries at the event, Sierra Leone’s First Lady Madam Fatima Bio, who is also the Commissioner-General for the EXPO 2020 Dubai, welcomed the President and his entourage to the special event meant only for Sierra Leone to discuss investment opportunities with business executives from around the world. She noted that a lot of effort was put into making the event colourful.

Mrs. Bio further stated that the event was a teaser that would eventually lead those who were willing to visit the resource-rich West African country, adding that it would also open space and contacts necessary to strengthen the partnerships they had created on that day.

In a short statement, His Excellency President Julius Maada Bio thanked participants for making it a point of duty to attend the Sierra Leone Investment Forum at the EXPO Dubai 2020. He noted that he truly appreciated them because they showed interest in advancing the partnership and wanting to invest in the country.

He further assured that his government had worked hard in the last three years to shape up the ecosystem to be conducive for business to flourish, fighting corruption and working very hard to make sure economic fundamentals were strong. He added that the new administration had changed the narratives about the past and would continue to do more.

“Therefore, I am seeking patient investors who want to do business that will bring shared benefits in a very good environment. Ladies and gentlemen, I am here to invite you to Sierra Leone and to let you know that we will not only welcome you, but we will also accompany you all throughout and give you the after-service support you deserve. I expect you to come to Sierra Leone. Thank you,” he concluded.

He thanked them for the love and patriotism they had shown by attending the Exhibition Day of Sierra Leone at the EXPO Dubai 2020, and for comporting themselves in a foreign country. He added that the UAE was a country of law and order, and, therefore, urged them to be ambassadors of Sierra Leone by putting on their best behaviours.

“My government is working hard back home to make the country a place we all can be proud of. That is why we are hugely investing in education for the future of our children and national development. As a country, we are beginning to be recognised in the world for investing in education and for fighting corruption. I, therefore, encourage you all in UAE to be law-abiding because you all are ambassadors of Sierra Leone,” he noted.

The newsletter features articles on the cooperation between Sierra Leone and the UAE, the strides already made by President Julius Maada Bio, particularly his Human Capital Development agenda and the efforts of the Office of the First Lady at protecting women and girls.

He also thanked the community for attending the event and for celebrating Sierra Leone's National Day at the EXPO 2020. He also used the occasion to provide updates on development efforts by his government while encouraging them to always put on their best conduct and serve as good examples.

Also at the event was Her Excellency Madam Fatima Maada Bio, First Lady of the Republic of Sierra Leone and Sierra Leone's Ambassador to the UAE, Rashid Sesay. 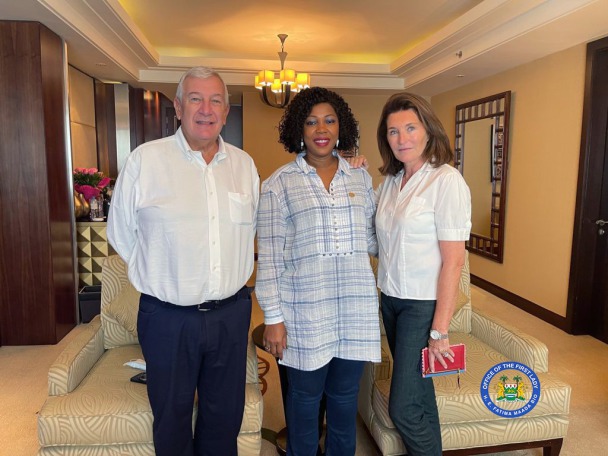 Dubai, United Arab Emirates, Saturday 2 October 2021 - Former First Lady of France, Madam Cécilia Attias, has met with Her Excellency Madam Fatima Maada Bio, where she commended Madam Bio for her resolve in protecting women and girls particularly through the “Hands off Our Girls” initiative.

During the meeting, Madam Bio discussed a host of initiatives she had undertaken in Sierra Leone to protect and safeguard the welfare of women and girls in Sierra Leone and the African continent. She said that the “Hands off Our Girls” initiative was to complement the efforts of the government to create a safe environment where women and men could thrive together.

She mentioned that the campaign had not only raised awareness on sexual violence but had also brought men onboard as partners in promoting the rights of women and girls in the country. Madam Bio also discussed her Free Sanitary Pad initiative, adding that the initiative of the free sanitary pads to school going girls had helped girls to promote quality and healthy hygiene practices and empowered them to be more comfortable in school during their menstrual cycle.

On her part, Madam Cécilia Attias said that she was impressed by the activities of Madam Bio and spoke of the importance of women in nation building. She assured of her support to Madam Bio and the “Hands off Our Girls” initiative. She also expressed willingness to visit Sierra Leone in the very nearest future.

Madam Cecilia Attias  runs the Cécilia Attias Foundation for Women which seeks to provide a platform to champion women’s equality and wellbeing.

The pavilion, among other things, contained displayed items of key investment areas in Sierra Leone including education, agriculture, tourism and mining and would be used by the country throughout the next six months.

Addressing visitors during the opening, Her Excellency said that Sierra Leone would use the mega event to project to the world its rich historical culture and values and also showcase its religious tolerance and diversity.

She noted that during the next half-a-year, they would use the platform to tell the beautiful stories of the mineral-rich nation and the strides already made by the New Direction government, particularly in the area of human capital development as the hallmark for sustainable and inclusive development.

Sierra Leone’s Ambassador to the UAE, Rashid Sesay, who was also part of the event, said that: “I am pleased to join Her Excellency to open our pavilion. I am optimistic that this event will open more windows of opportunities for our country.”

During the event, UAE Minister of Tolerance and Coexistence and Commissioner General of the EXPO 2020 Dubai, His Excellency Sheikh Nahyan Bin Mubarak Al Nahyan, said that during the EXPO event, the UAE would share with the world their experiences noting that through connecting minds, they had been able to achieve milestones that seemed impossible. He said the UAE had over the years focused its development on investing in human development, expanding infrastructure, economic diversification and creating opportunities for everyone to grow and prosper.

“Our mere presence here, amid all the challenges the world is facing, is a proof of the keen commitment to make the world a better place for all. By hosting EXPO, we aim to convey a message of tolerance and that we are willing to collaborate with the world,” he said.

Secretary General of the Bureau International Des Expositions, His Excellency Dimitri S. Kerkentzes, said that with more than 190 countries participating, the world was coming together for the first time since the pandemic to connect, exchange and learn on the extraordinary global stage, adding that the event would provide a platform to showcase innovative and cutting-edge solutions to global challenges.

Reacting to the ceremony, Her Excellency Madam Fatima Maada Bio, who is leading Sierra Leone’s preparations for the EXPO, said that the show was an opportunity for her country to showcase its rich and diverse culture to the world.